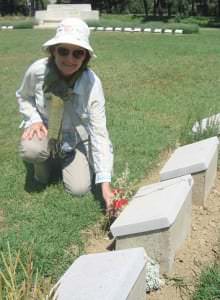 Soon we will be remembering the centenary of the end of WW1. Sometimes called the Great War, it was fought from 28th July 1914 to 18th November 2018.

My grandfather, Brigadier General Thomas Longford who inspired me to write my novel, Glory, died on 21st August 1915, more than three years before the war ended. He fought at Gallipoli and, like so many of the 58,000 Allied forces who were killed there, his body was never found.

But my grandmother, the mother of six young children, never gave up the search. She hoped that the tattoo on his chest of his coat of arms might have preserved the skin. She was still sending letters to the War Graves Commission, pleading for information, in the 1920s, even though by then it had been recorded that, in all probability he had burned in furze fires, dead or perhaps only wounded, after his charge up Scimitar Hill.

Strangely, even without a body, there is a grave for Brigadier General Longford. I saw it myself and laid flowers in my grandfather’s memory.

His disappearance and my grandmother’s inconsolable search, brings home the particular sadness of a death which is also a disappearance and is mourned in absentio. The sadness is even greater in his because the Gallipoli Campaign was ill-conceived, mismanaged and ultimately pointless. You can read all about it in my novel, Glory.