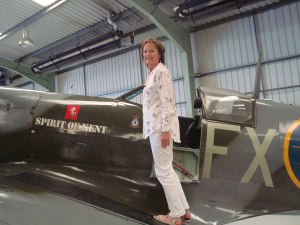 2020 is the 80th anniversary of the Battle of Britain. This was the first victory in the war against Hitler’s ambitions to rule the world. Thanks to the skill and bravery of a  vastly outnumbered Royal Air Force, the great Luftwaffe was turned back from their aim to conquer the British skies as a first step to taking the land.

I was born during the Second World War and grew up in London and the country. The visual imagery of post war bomb sights and the sense that I had just missed being a part of a huge catastrophe that changed the lives of so many people, both civilians and in the services, made a deep impression.  Those who fought with the RAF in the sky, particularly fascinated me because it was still such a new service and because it seemed so extraordinary that young pilots risked their lives in short bursts throughout the day before returning to relative safety at a base. They could even dash up to London or to their homes as long as they were back by dawn to face the possibility of a gruesome death. This was vastly different from my last historical novel, ‘Glory – A Story of Gallipoli’ where soldiers were posted on a desolate Turkish peninsular for months or  longer.