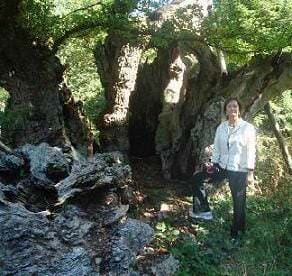 Trees mean a lot to me. I grew up in a Sussex garden where a four hundred year old Oak grew, a Monkey Puzzle and a Wellingtonia of two hundred years apiece and a majestic Tulip Tree. When my ninety six year old mother lay dying in her bedroom, the leaves outside her window turned from green to golden, to copper to deep brown as if the Tulip Tree was in sympathy with the ending of her season. The leaves twirled downward as she finally closed her eyes.

My first act on acquiring a Dorset garden was to plant a Tulip Tree, Copper Beech, an Ash, two pink Horse Chestnuts and a row of Limes. Many others followed including a coppice of Silver Birch, Oak, Lime, Willow and Cherry. Then I read the magnificent last lines from Thomas Hardy’s ‘The Woodlanders’ when Grace remembers her dead lover: ‘Whenever I plant the young larches I’ll think that none can plant as you planted…’ Time to add a larch or two.

Meanwhile my brother, Thomas Pakenham, was publishing his best-selling books about trees, starting with ‘Meetings with remarkable Trees’, and I found myself posing besides trees from Dorset to Mauritius – just for scale of course.

So I was quick to say yes when The Woodland Trust asked me to contribute to a book of newly imagined tree fables. It comes out on October 19th, called ‘Why Willows Weep- Contemporary Tales from the Woods’. My story is called ‘The Cuckoo and The Cherry Tree’ . Other authors include its joint editor, Tracey Chevalier and, amongst many others, Amanda Craig, William Fiennes, Philip Hensher, Blake Morrison, Kate Mosse, Phillipa Gregory and Maggie O’Farrell. It is a witty, mysterious book. 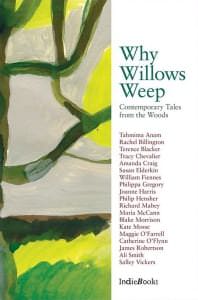 As a thank-you jaunt, some of us joined guides in Windsor Great Park on a brilliantly sunny autumn morning. We saw Oaks ranging from the newly planted to some ancient giants nearing a thousand years old. In the photograph above I am standing by King Offa’s Oak. King Offa ruled Mercia from 756 to 796.
Useful information: If you want to measure the age of a big tree, collect a few friends, join hands and hug it round the middle. Anything over three people makes it officially ‘ancient’ or over three hundred years.

The Woodland Trust can plant five native trees for each copy of ‘Why Willows Weep’ sold, and you can buy the book by clicking the following link: Why Willows Weep