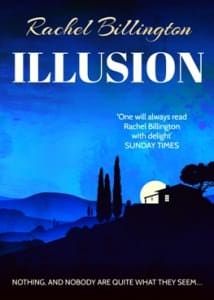 Early on in my career, I wrote short novels, sometimes no more than 50,000 words. But for many years now, my books have increased to three times that length. So why did I suddenly write a 45,000 word novella? Not easy to say. Illusion is a black comedy, set in the Tuscan hills of Italy. Eight very different people gather for a painting course. Many have dark secrets, most have serious problems, some are simply ridiculous. Up in the woods the boars are bellowing and down in the Villa Cinghiale, the painters gather round Inigo, the artist in resident, with his dangling silver curls and his huge sandals. His pupils include an ex-prisoner, an undercover policeman occasionally in drag, a sybilline Japanese professor, a sleek Texan searching for a third husband, a teenage boy on the prowl and two women who have known each other too long for comfort. Then the young girl cook goes missing and a murder hunt begins. What is Marcello, the almost too handsome Italian owner of the villa, doing in a hut high up in the hills? Closer to home, why is he shut up with Keiko in the generator room?

Illusion is published by Endeavour Media online and in print on demand.