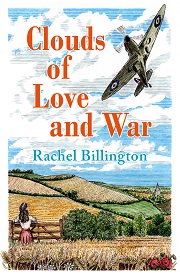 Clouds of Love and War

Occasionally panoramic, more often intimate, in Clouds of Love and War I try to balance a detailed and highly researched picture of life as a Spitfire pilot in 1940 with the struggles and ambitions of a young woman too often on her own. I hope the result is both a gripping story of war and a sensitive story of a love that struggles to survive.

Eddie and Eva meet on the eve of the Second World War.  Eddie wants only one thing: to be a flyer, finding escape from his own complicated family in the clouds. But the Battle of Britain makes a pilot’s life a dangerous way to flee reality. Eva has her own passionate longings: to become a painter. When Eva’s Jewish mother disappears into Germany, she is left alone with her elderly father. Both Eddie and Eva  come of  age at a time that teaches them that happiness is always fleeting but there are things worth living – or dying – for.

Through the connecting stories of these young people and their wider families, and against a background of Southern county airfields, London, Oxford, Dorset and France, I revisit the world of war-time England, now eighty years in the past.

‘Evocative, emotional and compelling, this historical novel may centre on a relationship, yet it throws open a door to the Second World War. Expressive, rich and sharp, Clouds of Love and War is an engaging and worthwhile read.’ Love Reading